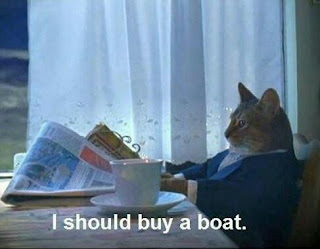 I suppose technically I’m no longer unemployed, though I haven’t officially signed any binding contracts or anything. I haven’t landed my dream job just yet, but anything is better than nothing. However, I can’t say that I learned utterly nothing from my delightful period of ennui. In fact, I think I might have just become one of the world’s most diabolical time innovators. Yes, I’m coining phrases now. “No dad, I’m not wasting time. I’m busy being a time innovator, gawddd”

Anyways, I’m on blogging hiatus for a few weeks while we’re at the cottage, so maybe these thrilling activities will tide you over until my inevitable return.

1. Re-alphabetize your bookshelf.
It’s organized by author’s surname? Sort it by title. If you really want to feel like a champion of neuroses, sort it by ISBN #.

2. Teach your pet amazing new tricks, like how to pull a rabbit from a hat, or to remove glitter from a shirt that survived Halloween 2010.

3. Roll coins.
This will a) make you feel slightly LESS broke and b) give you a quest. Find (steal?) other people’s change. Also, pick up any change you find on the sidewalk.

4. Establish an Orphanage for Lost Socks

5. Read a Babysitter’s Club book.
At the very least, being jobless is better than being a character in an Ann M. Martin novel.

6. Built a fort out of books.
Bonus points if you can fit in it.

7. Map out all the stores within a 5km radius that sell Grape Crush.
Visit a different one each time you want a pop.

9. Watch every single episode of Doctor Who ever made.
Become a Time Lord.

10. Make a series of top 10 lists in an effort to feel productive, and giggle at your own wittiness.